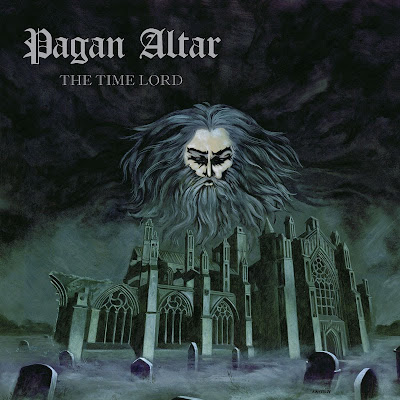 Finally available again soon!! After being unavailable for years we are more than proud to present the very first recordings from the mighty and legendary Pagan Altar dating back to 1978!

The first two tracks showcase the bands more straight forward sound in the form of Highway Cavalier and The Time Lord. Both of which after 1000 plus listens still raise the hairs on yer neck. The remaining tracks are the more Doom oriented numbers (Judgement of the Dead,The Black Mass and Reincarnation)that would appear years later on their 1982 Demo.

This will come with new artwork(shown above)issued in gatefold sleeve with photos of the 1978 lineup and lyric sheet. If you missed it originally come hear the first rumblings of the hooded figures dressed in black.

Pressing now and ready soon in black vinyl!
Posted by BBTAD at 6:16 PM