Formed in 1984 out of the ashes of Tempter, Michigan's Genocide burst forth playing their form of brutal thrash spurred on by the likes of Celtic Frost,Discharge and Slayer. Through three demo's the band found themselves with the need to continually increase the speed, heaviness and gore of their out put culminating in the January 1986 WFBE demo(aka The Stench of Burning Death). This would be their final recording before demo'ing the Slaughter of the Innocent(aka Horrified) and changing their name to Repulsion.

Although the Legend of Repulsion has been well documented the full history of Genocide had never been committed to vinyl. So here you go, all three demo's plus four outakes from the WFBE sessions along with a 12 page 12x12 booklet with tons of super early pix,flyers,zine coverage and artwork. Black vinyl as usual and a 500 limitation.

A fitting tribute to the early foundations of a death metal legend. 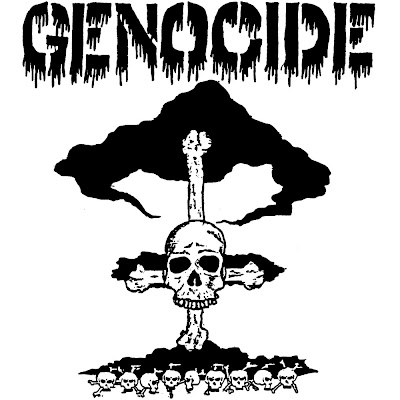