In the next week or so we will have three new records out for you to consider spending your hard earned money on, here is the first: 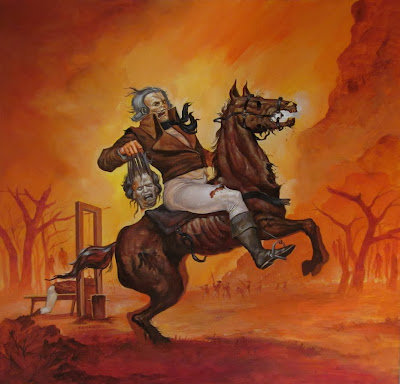 When you think of musically aggressive bands in the NWOBHM, obviously the first band that would spring to mind would be the mighty VENOM, however, amongst the smaller bands fighting for recognition like SHOCK TREATMENT or BLOOD MONEY, there existed a band so underground, and with a name only whispered in select circles rarely, it become hard to actually believe that they ever existed.

First mentioned publically in Malc McMillan’s NWOBHM encyclopaedia, ROBESPIERRE were noted for their occult leanings, and the fact they were allegedly so fucking heavy. Obviously, by that criteria they were a band that everyone was desperate to hear, fans of already noted heavyweights such as DESOLATION ANGELS, APOCALYPSE, RACE AGAINST TIME, PAGAN ALTAR or HELL have been constantly on the lookout for any known recordings by ROBESPIERRE but until now precious few have ever actually been lucky enough to sample their brand of audio violence or actually know ANYTHING at all about the history of the band!

ROBESPIERRE’s debut 1983 demo deserves its place in the all time unsung NWOBHM heroes hall of fame, alongside RACE AGAINST TIME and DEEP MACHINE, purely on the basis that it’s possibly the heaviest of all NWOBHM demo’s on the strength of its overall atmosphere and delivering an iron fist to the face of the listener. Listening to songs like “DIE YOU HEATHEN” and “BACKS TO THE WALL”, not only do you get insanely heavy metal, but you get what I can only describe as the perfect mix between early VENOM and the first PAGAN ALTAR cassette album! An almost impossible task in the hands of most, but these recordings have stood the test of time and still deliver the goods with a fury! Amazingly recorded on a four track cassette machine by just two lunatics, probably in a beer can littered gloomy attic, and only originally intended for close friends – ROBESPIERRE captured that elusive “NWOBHM” ethos and spirit that so many others failed to do.

However, not content with finally exhuming this amazing piece of British metal history, BBTAD have with the aid of ROBESPIERRES lead guitar maniac David, dragged even more recordings dating from the same year from their shallow grave. Showcasing a slower more controlled style in places, the songs are no less vicious. In particular “MAELSTROM” and “DECAPITATION” are two bloody knuckle classics worthy of investigation.There can be no doubt, that this album and these recordings need to be heard by a wider audience, or for that, we are forever in the debt of David for emerging from his rotting mausoleum and giving BBTAD this incredible opportunity!