THE WIZAR'D- PATHWAYS INTO DARKNESS LP

"No! We shall not give in. Marching our forces to the castle of sin. Burn! Their foundations down. Litter the ground with mangled limbs."

Originally released on cd by Barbarian Wrath in 2010 , we instantly became obsessed with the record. Nothing fancy what so ever, just 7 awesome tracks of real heavy metal that you cant get out of your head and will become a classic to those still around.

We added three lives tracks in the form of Crushing Gothic Slime, Horned Lord and Smouldering Sinners and comes with an OBI strip and four page book including lyrics.

No pope hats or channeling some crappy 70's satanic ritual because The Wizar'd are metal heads....and they hate you. 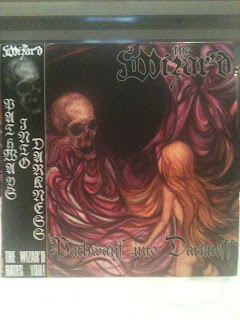